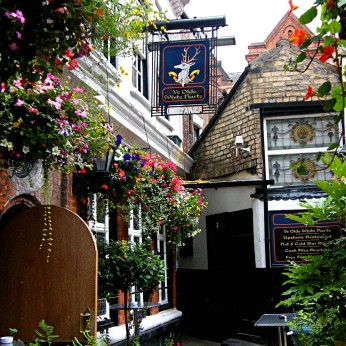 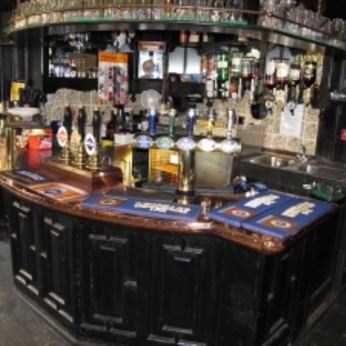 Destined as it was to be the property of Kings and the home of governors, this fascinating pub is steeped in history going back hundreds of years, with the present building having been constructed in 1550.

Although almost destroyed by fire in the nineteenth century, this extraordinary building has outlived the owner of the mysterious skull it houses, and outlasted those who have participated in great moments in England ‘s history.

The illustration is of the ‘White Hart Inn’ in Silver Street Hull . This is the only depiction of it, before the alterations in 1881 by Smith & Brodrick. What is now the pub was originally a house built in the Artisan Mannerist style similar to Wilberforce House, probably in the 1620’s or early 1630’s.

Perhaps, because of its historic and cultural importance, ‘Ye Olde White Harte’ has managed to remain relatively untouched over the years. The unmistakeable atmosphere of a place whose oak panelled walls and inglenook fireplaces have absorbed the good times and dealings of generations of revellers, plotters, shoppers, traders, diners and drinkers.

It is a Grade 2 listed building and has some beautiful old tiled fireplaces, and became a pub in the late 1700’s, after which a fire damaged the staircase and the ground floor.

This vibrant public house is now a corner stone of the Old Town culture of Hull. Many a great night can be spent here with friendly locals, and a great atmosphere.

Ye Olde white Harte has won “Hull In Bloom ” 2 years running, and we are now in the third year, hoping for a hat trick. Pop in and have a look this summer or click here to view some photography.

We have even managed to attract a pair of Green Finch, who have successfully reared 2 chicks, unseen before in Hull Town Centre.