The Three Greyhounds is conveniently located in the bustling area of Soho in London, a short stroll from Tottenham Court Road and Leicester Square Underground Stations, Soho Square Gardens and Chinatown.

Nicholson’s Pubs are known for their individual style, exciting stories, and charming personalities — The Three Greyhounds is certainly no exception, with a reputation for serving one of the best pints of Guinness in the area, as well as being a drinking haunt for the likes of Wolfgang Mozart, The Sex Pistols and The Clash, back in their day.

Enjoy live acoustic music in one of the most photographed pubs in Soho, within a cosy and warm atmosphere. With a reputation for one of the best pints of Guinness in the area, we’re also known to enjoy a party at the weekends, and what better spot to enjoy, than in the heart of Soho!

Dating back to 1847, The Three Greyhounds, was aptly named after the dogs who once hunted hares here, when Soho was open ground. Our location on Greek Street, dates back to the 1670s, named after the Greek Church that stood in Hog Lane. While it is recorded that Casanova stayed in this street in 1764, our pub is recorded in 1927, although licensed premises have existed here since at least 1847. Since those days we’ve also branched out into film featuring in a scene from Bend it like Beckham, and also as a live music venue for recording of Mike Posner’s acoustic rendition of, ‘I Took a Pill in Ibiza’ for Billboard Magazine.

FoodReal aleWiFi freeRugbyCask Marque
Something wrong with this listing?
I'm the licensee - claim my pub 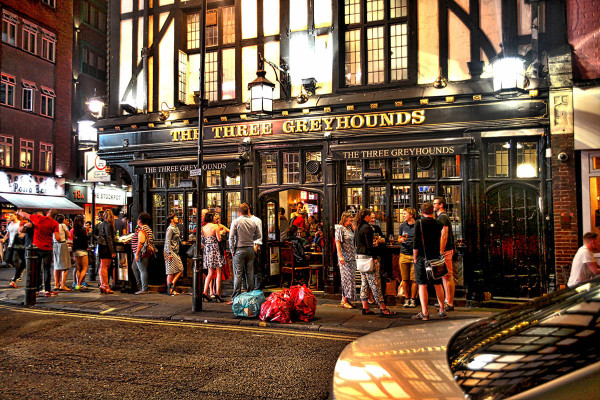