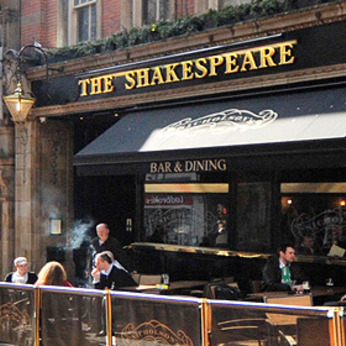 Welcome to The Shakespeare

You will find The Shakespeare in Lower Temple Street Birmingham within a short stroll of New Street Railway Station, Alexandra Theatre and Bull ring Shopping Centre - however you won't find another like it.

Step in to discover a traditional pub of unique character, revered for its eclectic range of real ales and its quality pub food, which are served, as they should be, with a generous measure of famous British hospitality.

Birmingham has developed dramatically since its early days which, around the time of the Domesday book (1083-1086) comprised 480 acres of land and was worth 20 shillings (£1). By the time of the English Civil War in the 17th century, Birmingham had become an important manufacturing town with a reputation for producing small arms. Arms manufacture in Birmingham became a staple trade and was concentrated in the area known as the Gun Quarter. The famous gun makers W. Powell and Sons, founded in 1802, were located close to Lower Temple Street, on Carrs Lane.

One of a kind
The Shakespeare is one of many rare gems in the Nicholson's collection of great British pubs, reputed for their distinctive buildings, intriguing history and vibrant atmosphere.