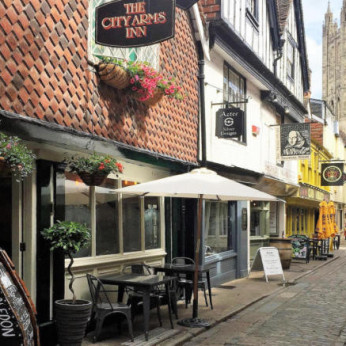 The City Arms is a traditional 15th Century Pub situated in the heart of Canterbury where you will be guaranteed a warm welcome.

The City Arms is renowned for its traditional real ales and ciders sourced from local micro craft brewers along with a great selection of Wines, Spirits and Cocktails. We offer great home cooked food from midday to 5pm seven days a week.

This beautiful 15th Century building is one of the oldest Pubs in Canterbury; it has been in existence for over 300 years. The earliest record of the pub is as the “Morocco” in the Licensing list of 1692. In the 18th and 19th Century, the Pub was known as the Angel and Castle and finally in 1892, the pub was registered under its present name The City Arms.
The City Arms escaped with only slight damage during the Wartime bombing raids on Canterbury when the opposite side of Butchery Lane was destroyed.
A major fire in July 2001 badly damaged The City Arms and the pub was closed for over 3 years until reopening, but still retains its old Canterbury charm and traditional pub status.