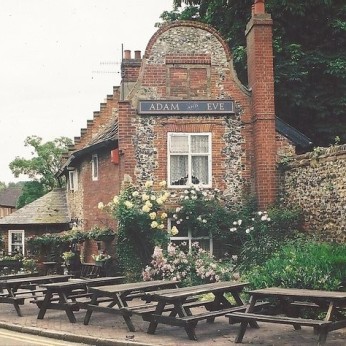 Adam & Eve is a city centre pub in Norwich, England. It is located on Bishopgate, close to Norwich Cathedral, the Great Hospital and Norwich Crown Court. It is widely claimed to be the oldest pub in the city, with the earliest known reference made in 1249

Named after a tale as old as time itself, The Adam and Eve is Norwich’s longest-running establishment. Records are, naturally, scarce, but staff claim the earliest known reference to a tavern on its site was made in 1249, where it was referred to as a brewhouse owned by Benedictine monks and used by workmen building the nearby cathedral. A Saxon well is even located underneath the lower bar floor.

Today, its position near the law courts ensures a colourful lunchtime clientele, as well as being a well-worn part of the city’s tourist trail.