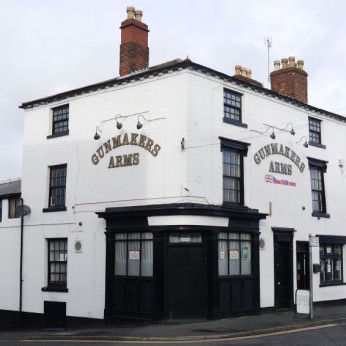 A traditional brewer of fine ales in the heart of Birmingham.

Using traditional methods of brewing, we have developed a range of ales representing the true spirit of a great city. With a batch size of 10 British barrels (360 gallons) the brewery is located to the rear of our dedicated outlet, the Gunmakers Arms, in the historic Gunmakers’ quarter and supplies pubs, clubs and restaurants across Birmingham and the West Midlands.

Besides brewing, Two Towers Brewery has a reputation for great events, held in the pub and the brewery, following themes such as local heritage, popular science, literature, comedy, fine arts and music. We also have a very popular programme of brewery tours, Brewery Experience Days and the recently launched Brewery Survival Course.

Two Towers Brewery is, essentially, a community organisation that is integrated into the fabric of its historic surroundings with the aim of enriching the experience of all those around us.

The Gunmakers Arms, Two Towers Brewery's real ale pub on the edge of Birmingham's city centre, opened it's doors in the summer after a dramatic transformation. Just a few minutes' walk from Snow Hill Station or a ten minute stroll from Birmingham city centre the 'new' Two Towers Brewery tap now has TEN real ale handpulls serving ales from the brewery, which, as you'll see from the huge 'shop window' revealing all, is just next door, across the beer garden.
Gunmakers Arms: 0121 236 8486.