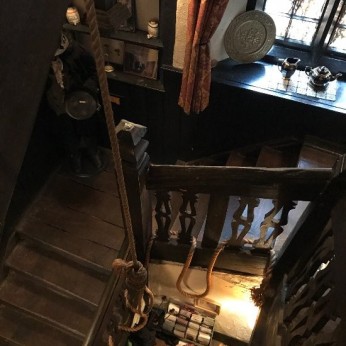 Reputed to be one of the oldest pubs in Wales, the Skirrid has a woven itself into history & folkore. Shakespeare himself is said to have taken inspiration from this place & Owain Glyndwr may have rallied his men on this very site.

Standing for over 900 years & located in the beautiful Brecon Beacons, the Skirrid Inn is steeped in legends of revolutions, ghosts & built on a mountain that once “shivered” - you will have to go a very long way to find an Inn with such history or character.

Just a few miles north of Abergavenny, and overlooking the windswept Brecon Beacons, The Skirrid Inn is one of the oldest establishments in Wales. The building the pub is currently housed in was built in the 17th century, but licensed premises have existed on the site as early as 1110. A popular rumour is that the pub was once used as a Court of Law where capital punishment was used for anything from treason to sheep-stealing. It has been linked to Hanging Judge Jeffreys, who carried out mass executions in 1685 following the Monmouth Rebellion. According to the BBC, a beam at the 900-year-old pub still bears the scorch marks of the ropes used in the killings.