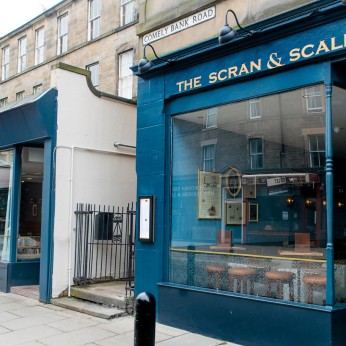 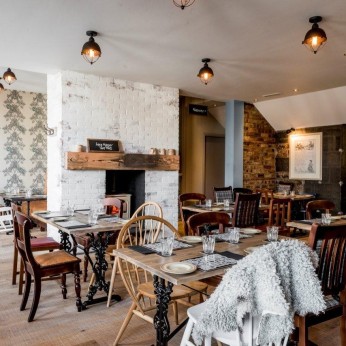 The Scran & Scallie, which received a prestigious Bib Gourmand from the Michelin Guide 2017 showcases a seasonal menu in line with the ‘From Nature to Plate’ philosophy of the gastro-pub. Modern dishes such as Fish & Chips, Fish pie and Sunday Roast are served alongside some forgotten classics such as Sheep's Heid Scotch Broth, traditional Cottage pie, Chicken liver parfait and Eton mess to name a few.

The pub is open 7 days a week serving lunch, bar ‘scran’ and dinner as well as an extensive drinks menu throughout the day.

Breakfast is served from 830-11am on Saturdays and Sundays throughout the year.

The rustic but charming interior of the pub features many of the old features of the building, refreshed with modern Scottish accents and a hint of Scandinavian influences. Furnishings are distressed and reclaimed with tartan and tweeds, adding character and bringing the original interior back to life. Fabrics from the Isle of Bute mixed up with exposed original brickwork and natural tones are sitting alongside tactile Scandinavian finishings and wallpaper by Scottish design duo Timorous Beasties.

The Scran & Scallie is located on one floor and has wheel chair access. We do not operate a dress code.

We welcome children of all ages until 10pm and we welcome dogs.