The Old Mill was built in 1803 on the site of an early Norman castle. The Mill was originally used to grind chalk and in 1815 a barley Mill and Malt Kiln were added.

The building started life with six sails but these were removed in 1868 after one of the sails fell into the road. From 1868 the Old Mill was driven by a large gas engine from the town gas works and continued its working life until 1950.

In the summer of 1990, Dransfield Construction of Hull took steps to turn the now derelict Mill into a Pub and Restaurant. During construction and early Saxon burial ground was discovered. The artefacts found can now be viewed in the close by Baysgarth House Museum.

The Old Mill was then purchased by Marstons of Burton Upon Trent in December 1993.

Today it is a family run business selling Ales from Marstons and Beers, Wines & Spirits from around the World.

Food
Something wrong with this listing?
I'm the licensee - claim my pub 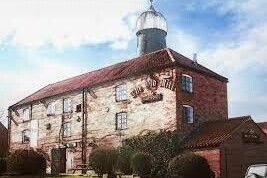