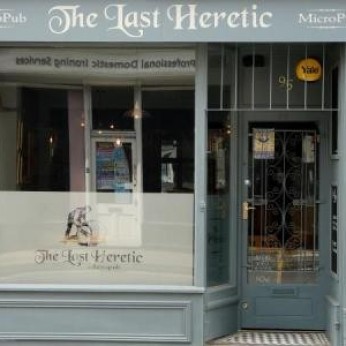 The Last Heretic, in Station Street, aims to be a laid-back micro-pub, which offers something for everyone, including a wide range of Real Ales from Burton breweries as well as some other National and International beers.

Also a range of Ciders and Perries along with "craft" bottled lagers. It is the brainchild of Peter Spittles who decided to open his very first pub after working as cabin crew for 21 years. Pete says: "I'm excited, it's an entirely new venture for me, but I think there is definitely a market for it, and Burton is the place to do it". The pub itself is named after Edward Wightman, born circa. 1580, who lived most of his life in Burton and was the last person in the UK to be burned at the stake for heresy. He spoke out strongly against the church, and when he failed to recant, he was burned outside Lichfield Cathedral in 1612 !!