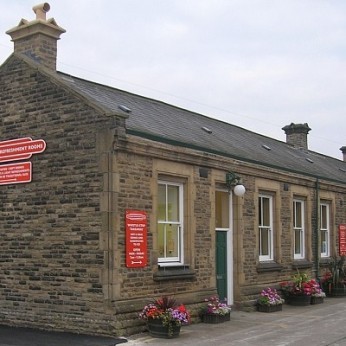 Situated on the forecourt of Sowerby Bridge Railway Station, The Jubilee Refreshment Rooms are operated by two railway enthusiasts, Chris and Andrew Wright, who have re-created the type of Station Refreshment Rooms that would have been available during th

Hot and cold snacks are served most days, and free Wi-Fi is available for customers' use.

The Jubilee Refreshment Rooms Cafe - a variety of cakes, a choice of Teas, a range of Coffees, Hot Chocolate, Fruit Juices, Soft Drinks and other Light Refreshments. Pie and peas, Jacket potatoes, Burgers and Toasted sandwiches are available from 12 noon to 14:00 six days a week, with last orders for hot food 13:30.