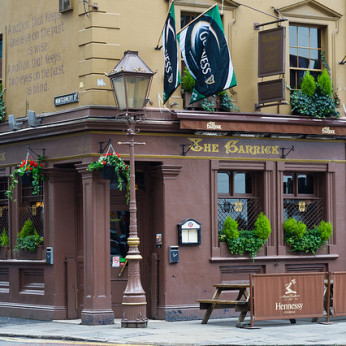 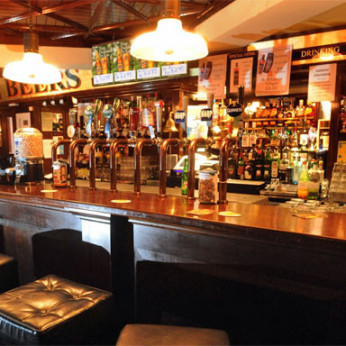 It has been said that the famous 18th-century Shakespearean actor David Garrick – who coincidentally was involved in the wine trade before he succumbed to the lure of the stage – once visited this bar for a drink, but that seems a highly unlikely notion. Garrick did visit Ireland on a few occasions, mostly performing in Dublin, but he died in 1779, around a century before the Garrick bar was founded.

It’s possible, however, that the 'Garrick' name could have been inspired by the Garrick Club, a fashionable London rendezvous which was founded in 1831 as a place where ‘actors and men of education and refinement might meet on equal terms’. The Garrick Club was a favourite watering hole of the author William Thackeray, who visited Belfast in 1842 and for all we know he may have planted the suggestion in someone’s head at that time.

Around the time of Thackeray’s visit, the site of the Garrick was occupied by the marble and stone yard of William Low, who later ran a unique combined enterprise of spirit dealer and cement merchant in Victoria square on the site of what is now The Kitchen Bar. At some point during the 30 years that followed, a tavern was established at the corner of Chichester Street and Montgomery Street, and in 1870 McCauley, McCashin and Co, who described themselves as rectifying distillers and wine and spirit merchants, were dispensing drinks at this location.

The Garrick name was in use by 1892 at the latest, when W.J. McCoy ran the Garrick Bar and Billiard Room. Before the turn of the century, the bar became the second licensed premises to be acquired by the burgeoning partnership of Braithwaite and McCann and for many years had served as the firm’s head office in the city.

Recently owned by the O’Neill family, who were proprietors of Robinsons in Great Victoria Street for some years, designed the interior with a smart combination of tiling and woodwork, which has earned the venue the accolade of Belfast’s Best Kept Small Building on a number of occasions. The Garrick was bought by Beannchor Ltd in May 2006 and in February 2007 was taken over by the manager Colm Oates.