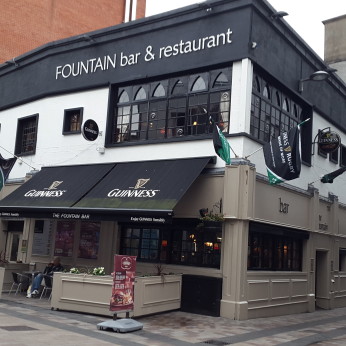 The Fountain Bar, with its cosy saloon downstairs and the first floor restaurant, was established on the site of the former Fountain Street National School at the end of the 19th century. The bar survived until the Second World War, when it was severely damaged during the blitz of 1941 and had to be demolished.

The Convery family who owned the bar at the time rebuilt the premises in 1955. The Fountain Bar & Restaurant was so called from the two (or possibly three) fountains that were situated in Fountain Street in the 1780s. They distributed water from Mundy's Well near Sandy Row and for many years this was organised by the Charitable Society.

Open each day from 11:30 am The Fountain Bar & Restaurant is a very traditional pub with Tudor design and a warm and friendly atmosphere. The downstairs bar is traditional in style serving premium beers, wines and spirits. Watch your favourite sporting event with an ice cold pint of beer or relax with friends in the outside seating area.