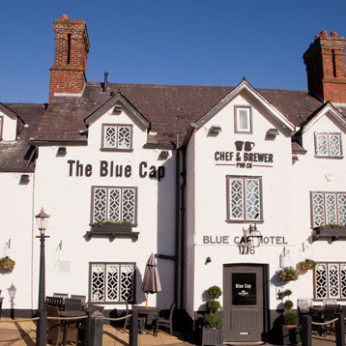 A charming stone-built pub dating back to 1716, The Blue Cap stands on the site of an even older pub, a heritage in keeping with this attractive and historic part of Cheshire.

The pub is situated in the village of Sandiway, just the other side of the historic Sandiway Golf Course from the beautiful architecture of Hartford, and the attractive roman town of Northwich.

The attractive Grade II listed Church of St. John the Evangelist is Sandiway’s most prominent landmark, one of the area’s many buildings designed by renowned Sandiway-born architect John Douglas. Just over a mile away, across the village, lies Oakmere Hall, another Grade II listed building; imposing and attractive, built from Lancashire freestone. The tree-lined streets of Hartford also house a notable Douglas treasure – Whitehall, a magnificent stuccoed-brick country house dating from 1835. Located amidst a picturesque stretch of countryside, The Blue Cap is a perfect spot to relax with traditional pub food and leisurely Sunday lunches, along with a bottle of fine wine or a glass of refreshing cask ale. The Blue Cap has stood in Sandiway since 1716, but an even older pub sat on this attractive spot of Cheshire countryside before it. Originally the Sandiway Head Inn, this traditional inn offered a respite from the uncomfortable, jolting coaches which used to take locals and travellers through the area. The first landlord was a local man, Thomas Gardiner or Garner, and in 1822, when Elizabeth Bull took over, the pub name was amended to The Blue Cap. Its renaming was a tribute to a famous Sandiway foxhound who won 500 guineas at Newmarket, after a bet between the Hon John Smith-Barry, then first Master of the Cheshire foxhounds, and owner of Blue Cap, and Hugo Meynell, the father of modern fox hunting.