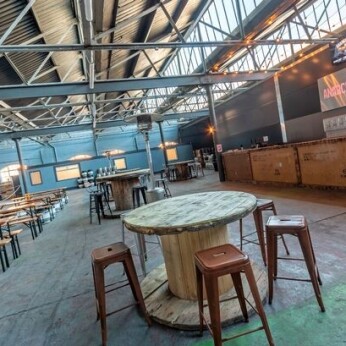 Our brewery started life up in Morpeth, Northumberland, back in 2012. One name change later, we settled on being called Anarchy Brew Co. and started brewing our core beers, packed with flavour that we still make today (Blonde Star and Citra Star).

After running out of room at the old site, we decided we needed somewhere bigger. And in October we moved to new digs in Newcastle upon Tyne, where you’ll find us today.

The new Anarchy brewery opened its doors in October 2018 in Walkergate, with the added bonus of our new taproom. Our taproom is open every weekend, playing host to tap takeovers, brewer meet-ups, gigs, DJ sets, and more. Check out our Taproom page for what’s on and what’s pouring this weekend. We’re open every Friday and Saturday from 12pm – 10pm. And if you fancy having a tour around the place, get in touch!

Anarchy Brew Co. beers can now be found across the globe, with kegs and cans recently shipped across to Russia, Italy, Finland and Japan. We also love a good collab, and 2019 has seen us teaming up with 7 Fjell Bryggeri (from Norway), with a few more in the pipeline. Keep an eye out on our Twitter page for regular updates on what we’re up to.

You might also have noticed our new artwork…kudos to the incredible skills of our designer, Josh (go check out his work here), plus our hookups with Exile Cycles in the US for Exile, and local UK artist, Ryan Roadkill, for our Flat Out IPA.